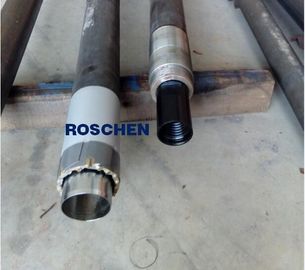 This core barrel has a spring-loaded inner tube assembly. When drilling in soft formations, the core lifter case protrudes up to 50mm in front of the bit, and acts as a cutting shoe. The soft core is protected from the water flush.

When coring in harder materials, the spring loaded inner tube comes under pressure and the inner tube retracts, so now the core lifter case assumes a normal position.

Wireline drilling is the special method of removing the core. When the driller wants to remove core from a conventional core drill, the entire core barrel has to be removed from the hole. This is time-consuming, as each rod has to be removed one at a time. With wireline drilling, a barrel of core can be removed from the bottom of the hole without removing the rod string. When the driller wants to remove the core, an overshot is lowered on the end of a wireline. The overshot attaches to the back of the core barrel inner tube and the wireline is pulled back and the inner tube disengages itself from the barrel.

It is available in 101mm hole diameter (74mm core) and can be used in conjunction with T2-101 and T6-101 core barrels which are more suited for hard rocks.

The 74 mm diameter core obtained with the mazier is compatible with the commonly used laboratory triaxial testing apparatus.

Using triple wall core barrel permits removal of the sample as it is taken from the ground, guaranteed the undisturbed sample of the core. Thats why these samples in addition good for large diameter geotechnical laboratory tests beyond geological purposes.

A PVC core liner is used inside the inner tube to retain the core, and a “basket” catcher can be used to prevent soft materials from slipping out.

This type of core barrel is used widely in some parts of Europe and Australasia and is reported to give 100% recovery in soft formations, such as sands, silts and marls.

The wireline system allows that only the core barrel (second and third tubes) have pulled out to the surface after 1.5 m core drilling, while the outer tube works as a casing.