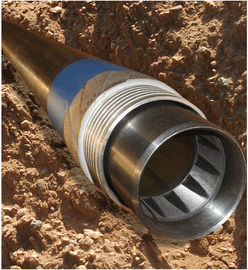 ROSCHEN have the capability to carry out diamond core drilling in various diameters - to depths up to 450m.

Core drilling is different to other drilling techniques in that a solid core of rock rather than cuttings is extracted from the hole. The diamond drill bit comprises a short steel shank with a cutting head using natural ("surface set") or man-made ("impregnated") diamonds as the cutting medium. In softer sedimentary formations and often coal, other cutting elements are used such as tungsten-carbide and polycrystalline diamond compacts (PCD). Water is the usual circulation fluid used to remove the cuttings and cool the drill bit.

As the drill bit advances, a cylindrical core of rock progressively fills a triple tube core barrel (double tube barrels are also used by some companies) immediately above the core bit. Core samples are periodically recovered, (ROSCHEN use 3.0m long core barrels,) at the end of the core "run" the complete barrel and the drill rods are pulled from the hole, the end of the barrel is disassembled by removing the core bit and catcher, the the stainless steel splits are then pumped out of the inner barrel by using high pressure water. The splits are then opened to reveal the core in virtually undisturbed condition.

Rotation speeds during diamond core drilling can vary from 150 to 400rpm for surface set bits, to more than 1500 rpm for impregnated bits. Penetration rates are much slower than other methods generally due to the hardness and at times the weakness of the rock, plus the time taken to retrieve the core barrel when drilling at deeper depths. An alternative to Conventional core drilling is wireline core drilling this can speed the drilling progress up especially when drilling deeper holes -

ROSCHEN also have the capability to carry out wireline core drilling.

Recommended Products
Get in touch with us
Get In Touch
65 EAST XINHUAN ROAD, SHANGHAI, CHINA
roschen@roschen.com
13764195009
About
Company Profile Factory Tour Quality Control Contact Us
Products
Down The Hole DrillingTricone Drill BitDiamond Core Drill Bits All Categories
Mail Us
Let us know your requirement. We will connect best products with you.
Sitemap │ Mobile Site │ Privacy Policy
China Good Quality Down The Hole Drilling Supplier. © 2015 - 2023 explorationcoredrilling.com. All Rights Reserved.