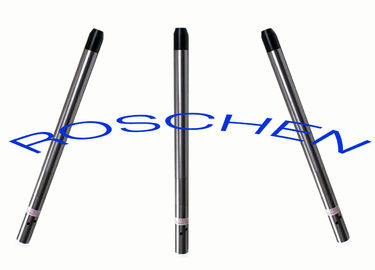 In order to carry out the Standard Penetration Test (SPT) to BS 1377:Part 9:1990. The Auto Trip Hammer, SPT Drive Rods and a Split Tube Sampler are worked together.

The basic operation of the complete set Standard Penetration Equipment are like the following sketch shows.

The purpose of the Standard Penetration Test is to identify the soil stratification and engineering properties of soil layers. During the SPT, it was possible to take disturbed and undisturbed samples (using split barrel-sampler) which were used for further laboratory tests.

The in situ penetration test provides a soil sample for identification purposes and for the laboratory tests that allow the use of disturbed samples. The method of sampling soil consists of driving a split-barrel sampler to obtain a representative, disturbed sample and to simultaneously obtain a measure of the resistance of the subsoil to the penetration of a standard sampler. The resistance to penetration is obtained by counting the number of blows required to drive a steel tube of specified dimensions into the subsoil to a specified distance using a hammer of a specified weight (mass).

All pertinent borehole data, penetration resistance, and sample data must be recorded on a boring log data sheet. The depths at the top or bottom of each 150-mm increment of sampler penetration along with the number of blows required to affect that segment of penetration should be reported. Data obtained from SPT, N-value, is collected following some important steps:

SPT Split Tube Sampler is for doing the Standard Penetration Test (SPT). We manufacture it according to BS 1377: Part 9: 1990. A Top ball valve Adaptor, a pair of Split Spoons, and an open SPT Shoe compose a complete set of SPT Sampler. Both plastic type and steel type basket retainers are available. The ball valve adaptor prevents sample from being washed out of the sampler when the sampler is withdrawn from the borehole. A 60 degree nose cone and long solid rod with 60 degree point are available as well. The screw connection on the top adaptor depends on the type of drill rods being used to drive the sampler, but is most frequently 1.1/2" B.S. Whitworth, NWY Rod, BW or AW Rod.

Recommended Products
Get in touch with us
Get In Touch
65 EAST XINHUAN ROAD, SHANGHAI, CHINA
roschen@roschen.com
13764195009
About
Company Profile Factory Tour Quality Control Contact Us
Products
Down The Hole DrillingTricone Drill BitDiamond Core Drill Bits All Categories
Mail Us
Let us know your requirement. We will connect best products with you.
Sitemap │ Mobile Site │ Privacy Policy
China Good Quality Down The Hole Drilling Supplier. © 2015 - 2023 explorationcoredrilling.com. All Rights Reserved.